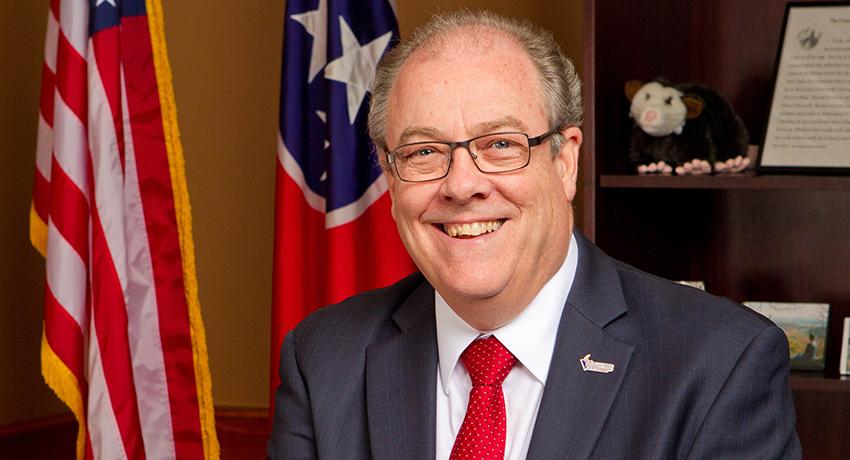 Jerry Faulkner, president of Volunteer State Community College, has announced that he will be retiring this summer. Faulkner will have served as president for more than nine years, guiding the college through a period of growth and challenge. “It has been a great privilege and honor to have served in the Vol State college community,” Faulkner said. “My time here has been the most rewarding of my life.”

He began his term on May 15 of 2012. Faulkner welcomed the addition of the new Wallace South Health Sciences Building in 2014. It provided new state-of-the-art labs for five programs. He was instrumental in the design and construction of the Steinhauer-Rogan-Black Humanities building in 2016, which brought new classrooms, studios, and performance spaces to the Gallatin campus. The teaching facilities were greatly needed as the college grew steadily throughout his tenure, reaching a record high enrollment of 9,227 in fall of 2019. Faulkner also negotiated a plan that made Vol State the community college operating a campus in Cookeville, eventually adding more than 900 students to the college each semester.

In academic programs, notable additions included the RN Nursing associate of applied science degree program. The first graduating class had a 100 percent pass rate on licensing exams. Classes are taught in specialized labs in Gallatin and Livingston. Mechatronics expanded from Cookeville to the Gallatin campus in 2018. It soon moved to a dedicated facility in the renovated Warf Math and Science Building, a project that also brought updated lab facilities for science courses on the Gallatin campus.

Most recently, Faulkner led the college through the COVID-19 pandemic. That included a sudden move to online learning in March of 2020 and the development of a comprehensive screening and tracking program on the campuses to help protect student, faculty and staff from the coronavirus. The celebration of the 50th Anniversary of the college will be marked this year with virtual events because of the pandemic.

“In the fifty years Vol State has served the citizens of north middle Tennessee, the college has awarded more than 30,000 degrees and certificates,” he said. “That is 30,000 lives that have been changed and 30,000 families that have been impacted. We hope people join us in celebrating that achievement."

Faulkner served as the vice president for Academic Affairs at Cleveland State Community College from 2008-2012. Prior to that, he was a faculty member, then Department Head for Life Sciences and later Teacher Education Coordinator at Chattanooga State Community College. He also held a two-year term as associate vice president for Academic Affairs at Tennessee Temple University.

Faulkner and his wife Wanda plan are still exploring options for retired life but will likely take many opportunities to travel. The effective date of the retirement will be August 31, 2021. The Tennessee Board of Regents will launch a search process for his successor, with a goal of a transition in the late summer. Faulkner is the third president to serve Vol State in its 50 year history.