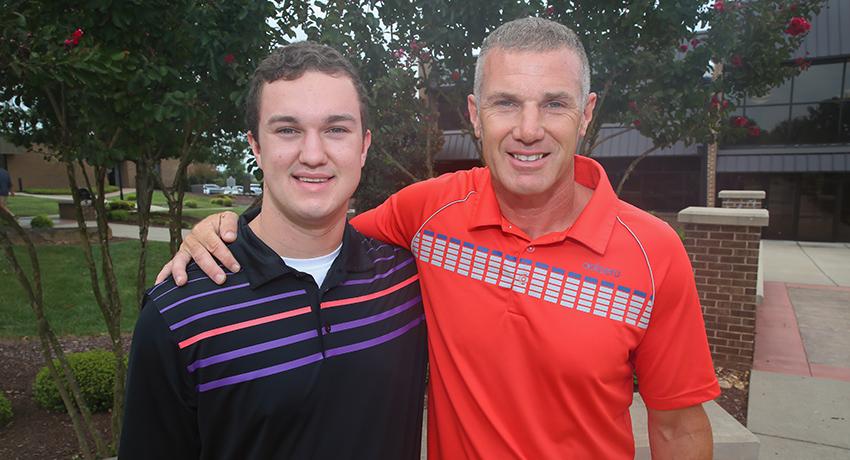 Many kids want to be firefighters. They may play rescue with their friends or push around toy fire engines. Jair Hawkins took it to a whole different level. “Every Halloween Jair dressed up as a firefighter,” said his dad, Jerrod Hawkins. “Every year. When he was ten-years-old he would ask me questions when I got home from work. How many calls did you get? How long did it take you to get out of the bay? Really specific questions.”

Jerrod has enjoyed a 20 year career as an EMT with the Brentwood Fire Department. He watched his son go from imagining fire scene responses as a child, to actively serving with a department.

“I begged him to let me be a volunteer firefighter. Finally, at age 15, he let me,” said Jair.

Jair is now a student in the Emergency Medical Technician (EMT) Basic program at Volunteer State Community College. It’s his first semester at the school. And it’s here that the story takes on a new meaning. The family has a stormy connection with Vol State that goes back 12 years.

“I don’t remember a whole lot from that day,” Jair said. “We went down to the basement and the next thing I knew the whole house is coming in on me.”

“I was working that day and I gave my wife a call to let her know about the storms,” Jerrod said. “I was talking to Amy on the phone and she said ‘I know it’s here’ and I lost the call. Ten minutes later I got a phone call from my neighbor. He said the boys were okay and were going to the hospital, but Amy was really hurt.”

That was April 7, 2006. An F-3 tornado ripped across Middle Tennessee and blasted into the Hawkins family home in Hendersonville. Amy covered up the kids with her body. She was found beneath bricks and rubble from the wreckage of the house. Amy survived, but with major injuries.

“I just remember her being gone a long time, two or three months,” said Jair. Amy had many surgeries and went through extensive rehabilitation. She was left paralyzed from the waist down.

The Sumner County community rallied around the Hawkins family. They were even stars on the ABC TV show “Extreme Makeover: Home Edition.” The episode is often referred to as an audience favorite by the producers. The family received a brand new house during the show, a home especially designed for Amy and her wheelchair.

Former Vol State president, Warren Nichols, understood the devastation of that tornado. He was on campus when the twister moved north and hit Vol State that day, tearing up buildings, and causing seven million dollars in damage. That connection with the Hawkins family moved him to set up Vol State scholarships for the two boys, Jair and Cole, in 2006. Twelve years later, Jair is walking the Vol State campus as a new student this fall. While he didn’t need the tuition part of the scholarship, thanks to the TN Promise program, he did receive a book scholarship worth $1000 each year.

“I didn’t know how it would work after so long,” Jerrod said. “So, I contacted Karen Mitchell in the College Foundation and she was wonderful.”

Dad says that his son Cole will also be using the Vol State scholarship in a few years. “Right now he wants to go into the Airforce and be a pilot. He wants to do two years at Vol State and then transfer to MTSU for their Aviation program.”

Amy is doing well, but still has pain from her injuries. Jair thinks back to that tragic day and said his mom did something special. “If she didn’t do what she did, I wouldn’t be here right now.” And Jair adds that there are other ties from the past to the present. “A few of my buddies at the station where I volunteer have dads that worked at the station that day, and responded to help us.”

Amy and the family recently took a vacation in Florida. It was the first time she had been in the ocean since the tornado. Jair wants to graduate, continue with Advanced EMT, and then complete the Paramedic program. He has already applied for paid positions at fire departments, including Portland and Murfreesboro. His goal is to eventually be a fire captain.

“I’ve known since he was two that Jair would be a fireman,” Amy said. And as for how the tornado has changed their lives, she replied: “I look at challenges as a positive thing. We lived through this. It’s a celebration of life we do each year.”

Pictured top: Jair and Jerrod Hawkins on the Vol State campus in Gallatin.

Pictured below: The boys are presented with the scholarships in 2006 by the Vol State College Foundation. Left to right: Warren Nichols, Buddy Shaw, Amy, Jerrod, Jair, Cole, Ed Mayberry and Stan Cole. 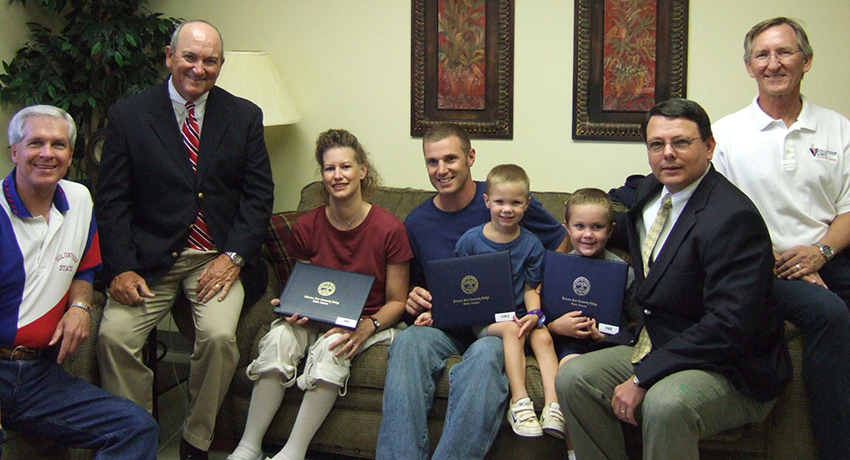