Skip to main content
1/31/2023 - Weather Closure Alert - Due to inclement weather, all Vol State campuses will be closed and classes canceled on Wednesday, Feb.1.Students should check eLearn for alternate assignments. Cookeville campus open for TCAT Livingston classes only.

April Riddle, Connecting the Resource to the Need

As an adult Vol State student, April Riddle believes in paying it forward, the mission of serving others, and the value of higher education.

In the 20 years she has been in Sumner County, April has raised three kids. At 17, newly married, and pregnant, she worked and earned her GED so that her daughter would not be born to an uneducated mother. She moved to the Nashville area at age 24 to live closer to family while she and her three small children looked to build a new life after a divorce. She found a job as a customer service representative in Nashville and secured a duplex in Hendersonville so her children could go to Sumner County Schools.

After running into some daycare issues, she left her customer service job to start her own house-cleaning business. This would give her the flexibility to manage time with her child and bring home an income.

April had always stressed to her kids how important an education can be. To lead by example, April continued her education process by attending Vol State when her oldest child started middle school in 2004. At this time, she struggled to juggle her schoolwork, her kids, and her job. April was able to complete the semester with a 3.7 GPA and believed one day she would be back to finish what she had started here at Vol State.

A few years ago, after being in the same house for 17 years, April was forced to move after her landlord elected to raise the rent by 20%. She received kindness from others and was able to rent the two-bedroom basement apartment of a friend. The kindness she received during this ordeal created a mindset in her to pay it forward. Soon, she was holding a drive to collect shoes for the kids in need in Sumner County. This effort quickly expanded to coat and food drives.

With this mindset of helping others, April created a network of local churches and non-profit organizations in the county. This network enabled the collection of food and clothes items and the distribution of these items to those who needed them. Two years ago, April created a Facebook page entitled Community Unity Sumner TN as a tool to help connect the resource to the need. Today, she estimates that she has over 1,500 followers and works with about 100 local churches and organizations.

During this time, April felt a need to move on from the house-cleaning business. A passion was growing in her for community outreach, and she hoped to find a position where she could help others and receive health insurance and retirement benefits, something she didn’t have as an independent contractor.

She found that many of the positions she was interested in required some amount of higher education. April knew then she would return to Vol State to continue her education. She kept that promise to herself and is currently enrolled at Vol State and on the path to obtaining an associate degree in Human Services next year.

In coming back to Vol State after all these years, April has found great support in the resources offered by the college. She applied for and was accepted to the TN Reconnect program. This program is a state financial aid program and allows eligible adult students to earn a college degree tuition-free. April found support from the Office of Adult Learners as well as the many resources at the Learning Commons.

April mentioned recently, “As an adult learner pursuing an associate degree in Human Services, these are the resources I am using and the resources I would like to encourage my fellow student body to both support and utilize as needed.”

She still has that mindset to help others. While April works hard in her classes, she finds time to be a peer mentor at Vol State and to work closely with the United Way of Sumner County. She still manages her Facebook page which serves as a resource of resources. April believes her pursuit of higher education will open more doors in her life, which in turn, will allow her to do more for others.

With a mindset to continually rise above any obstacle thrown her way, April will continue to have great success at Vol State and beyond. 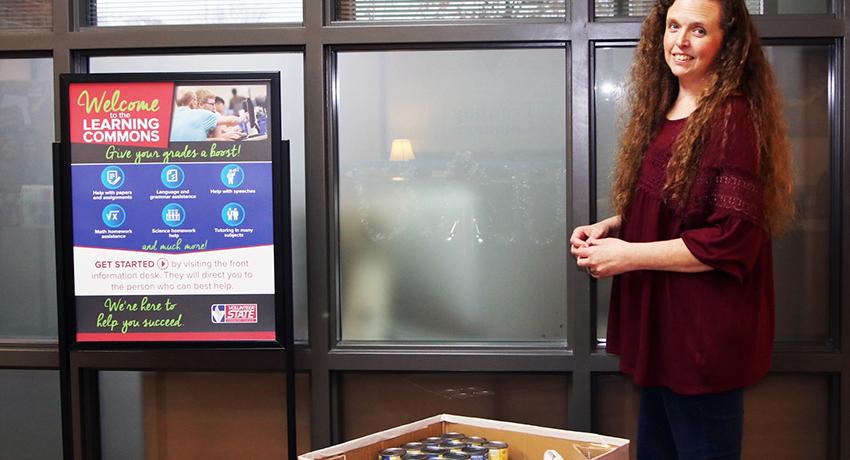